A group of students and engineers at the Center for Design and Manufacturing Excellence (CDME) partnered  with the Department of Athletics to create 20 one-of-a-kind 3D-printed replicas of the “cathedral of football” in celebration of the 100th anniversary of Ohio Stadium.

In February, the Department of Athletics approached CDME with a unique challenge—using their world-class 3D-printing capabilities to create replicas of Ohio Stadium as a gift for their most generous donors. Each printed replica also needed to include a piece of turf from the 2014-2021 seasons—material that witnessed a national championship team, five Big Ten Championship teams, a 48-4 home record and three wins over That Team Up North.

“Creating a 3D model of Ohio Stadium is no easy task,” said Storts. “Students were entrusted with creating an accurate representation of the modern day ‘Shoe, implementing a design that highlights the stadium turf and utilizes material that remains sturdy while showcasing detail; all while finding ways to reduce cost and printing time.”

Students led every step of the process, from creating a computer-aided design (CAD) file that duplicates the stadium to correcting any imperfections in the final 3D-printed product. Each stadium took around 20 to 24 hours to print and used 10.5 pounds of polylactic acid (PLA), a bioplastic. In comparison, the original Ohio Stadium finished in 1921 required 40,000 cubic yards of concrete and 4,000 tons of steel.

“I learned a lot of problem-solving and troubleshooting during this process,” Miller said. “With the printer that was used, it didn't always come out the way it was supposed to. I learned product management as well. Due to unforeseen circumstances, we only had about two or three weeks to print 12 stadiums, so we had to make sure that we made the time for it. I oversaw planning out when to print and ordered the materials we needed.”

Prior to working on the stadium models, Miller had little to no experience with 3D printing. He said working at CDME has given him project management skills and a new perspective on what it’s like to work in industry.

CDME works with companies and researchers to translate new technologies into real-world, market-ready manufactured products. These projects give student employees at CDME hands-on experience integrating new technology and working on industry projects. Student employees work in an industrial environment that matches their experience after graduation.

Given the long production process and importance of this project, students were very concerned with the quality of the final product, said Storts. The team developed a system to thoroughly check that each 3D-printed stadium was printed correctly. The students were able to learn skills that directly translate to real-world projects for industry, such as project management and post-processing of imperfections.

The Department of Athletics presented the one-of-a-kind stadiums to donors in October as part of the 100th anniversary of Ohio Stadium celebrations.

“The finished product is evidence of the collaborative spirit that exists here at The Ohio State University,” said Ian Schumaker, director of donor relations for Athletics, “The Department of Athletics and the CDME are both dedicated to developing people. This project served as an opportunity to do so, while also celebrating a momentous occasion in the university’s history.” 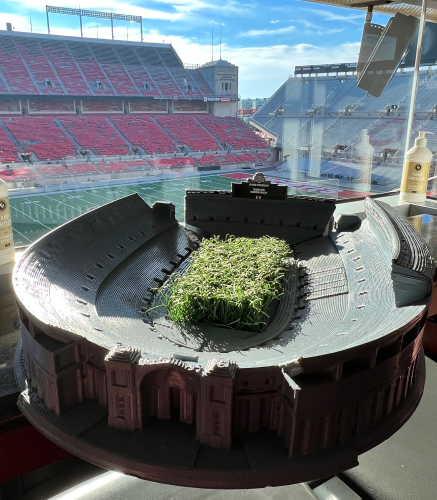