CDME grad engineers passion for coding into a career path

When most of his peers in the eighth-grade were discovering the basics of algebra, Adwaya Sau uncovered a passion for coding. 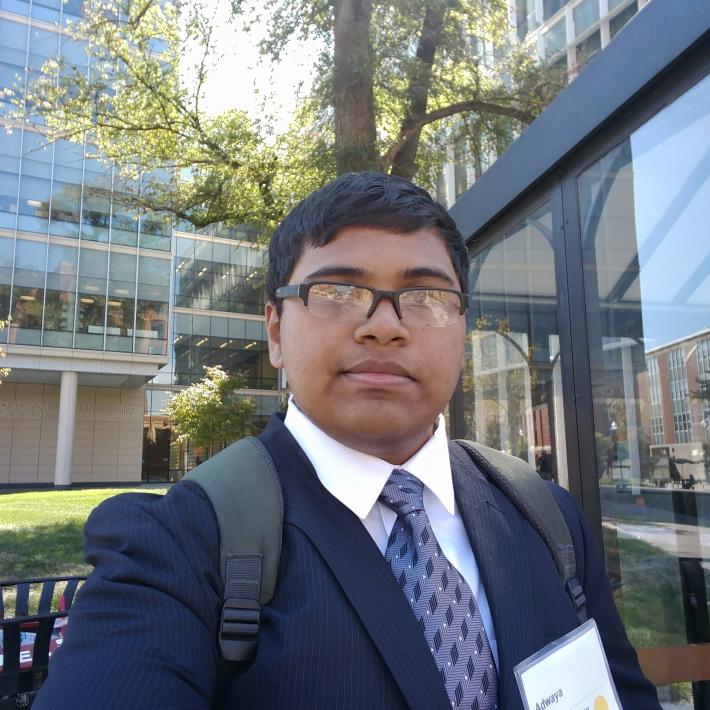 Fast forward to the present – Sau is now a graduate of The Ohio State University with a degree in electrical and computer engineering. He accepted a role as a software engineer at Capital One in Washington, D.C., where he’ll apply the skills developed throughout his academic career and as a student apprentice at the Center for Design and Manufacturing Excellence (CDME).

Sau arrived at Ohio State with a solid understanding of computer science. Although coding came naturally for the enthusiastic learner, his skills were matured with the help of his mother and a dedicated computer science teacher.

“In high school, I realized that I liked studying computer science more than other subjects,” Sau said.

That love of computer science led him to leave his home and family in India to pursue a degree at Ohio State.

It was at Ohio State that he met Vimal Buck, a lead engineer at CDME. Buck taught Sau’s undergraduate course, “Introduction to Microcontroller-Based Systems.” Through that interaction, Sau was also introduced to CDME.

“In class, you expect to get a certain result,” Sau said. “But at CDME, you get to experience all the difficulties and problems that can crop up. You always have to have patience, even if things don’t go as expected, and you’re running into deadlines. You have to keep attacking the problem to make sure it is solved.”

Sau describes Vimal’s course as his favorite throughout his academic career at Ohio State – mainly due to the incentivized final project. The assignment directed students to build a unique technology that used a microcontroller. Buck offered the class a deal: the top-five finishers would have their final exam waived. That was enough motivation for Sau – he got to work.

“I made a two user Bop-It game using three microcontrollers, and I think Professor Buck was really impressed with that,” Sau shared. “When I came to him to get help on the project, he took me to CDME, and I saw everything that was going on. It was really interesting to not only learn about the opportunity to work there but also about working on embedded systems in general.”

Those visits to CDME inspired him to join the team as an undergraduate student worker. A role that allowed him to gain hands-on, mentor-based experience integrating new technology into market-ready applications.

Sau started at CDME at the beginning of his senior year. He was immediately placed on a team responsible for developing a spectroscopic sensor for screening the nutritional and quality traits of field crops.

The project was brought to CDME by Dr. Christopher Ball, a research scientist at Ohio State’s ElectroScience Laboratory, and Dr. Luis Rodriguez-Saona, a professor in the Department of Food Science and Technology. CDME was tasked with transitioning measurement processes developed in the laboratory by Dr. Rodriguez-Saona into a small sensor prototype. The technology would allow the quality and nutritional value of soybeans to be evaluated quickly and simply by farmers, crop distributors, and food producers.

Sau and his teammates were instructed to build an Android application that communicates with a microcontroller using Bluetooth to screen field crops, specifically soybeans. Sau had previous experience building Android applications and embedded systems, which he was eager to apply to the project.

Current technology for the process is limited. It requires sending samples to a lab for testing or using a handheld near-infrared optical technique, which leaves out the necessary amino acid profiles.

The need for the device was clear to the team. With Sau in a leadership role, they worked to produce a device that was simple to use and generated quick, accurate results.

The prototype was completed in February 2020 and worked as envisioned.

“Everything was being controlled wirelessly or through Bluetooth from the Android application,” Sau shared. “It was a really cool project to complete during my time at CDME.

“Without Professor Buck and his expertise, it wouldn’t have been possible. He’s been my inspiration to gain more experience in embedded systems.”

Sau plans to use this real-world, project-based experience in his new post-grad role.

“CDME helped me gain professional experience on the whole spectrum of microcontrollers and embedded systems. I think that’s definitely something I can use for my own projects throughout my career, wherever it leads.”

Conner Buel bridges the gap between design and engineering at CDME